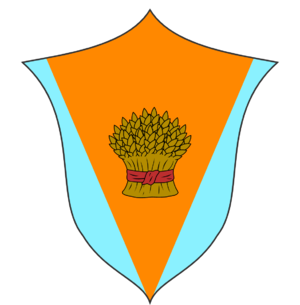 Coat of Arms: A bound haybale secured by a crimson rope.

Motto: The wise know when battle is not with swords but words and cunning.

Story: The Alpines are known for being a family of socialites, even before they became a Baronet, and are some of the most skilled at socializing in Santua, some might say unmatched. They are known for being able to sweet talk people out of starting wars or having disputes with each other. Basically, their tongues are some of the most silver tongues around. Francis is perhaps one of the most silvered tongue of them all because he has stopped more than one civil war from breaking out in Santua. However, it was Frances' display of 'social combat' at one of the Festivals of Unity that caught the attention of Kalem and earned Francis the Baronet title. At one of the festivals of Unities some of the family Knights across the kingdoms were getting into a big disagreement and would not settle easily. In fact they almost broke the peace of the Festival of Unity but Francis was able to defuse the situation. This is what earned him the title of Baronet for the Santua family.

Family Hook: Alpines are known socialites and are also ambitious. They often put special effort into attending events and get togethers so that they capture the eye of nobles and royals. They even often get invited to events not typically open to commoners or people with no authority. They want to make connections with powerful people to get their attention. If they can't get a Baronet from a noble family they will shoot for trying to become a Consort to someone or their Supporter. Sometimes, becoming a Supporter is worth the price to pay for an Alpine.

OOC NOTE: Alpine history will be updated if need be, should stop being Baronet. The reason he is no longer Baronet will be listed.