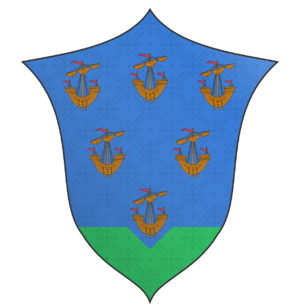 Kingdom Motto: God Larthin may have cursed us but the Gods have also given us a chance to continue, why rebel and not just let things go as they may? We'll know what is what if we keep on keeping on.

Exports: Anything that can be found in water. 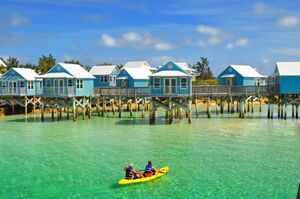 Land, Climate, and Building: The lands of Choisi Kingdom consist of a variety of islands in varying sizes. Their islands are, most of the time, very tropical and warm. Winters for them, unless close to the mainland, is rarely involving snow and rarely very cold. When Choisians build something besides a ship, typically what they will live on, it is houses on stilts, connected by docks, in the water and throughout the islands. These houses are mainly made out of materials easily found in a tropical climate such as palm fronds, grass, wood, driftwood, some stones, etc. The houses are often accented by florals or items found in the ocean. Though they have farmlands it is smaller than most of the kingdoms and, of course, with crops more suitable to the warmer climates Choisi Kingdom has. (OOC: An image example is included)

About the people (Stereotypical): Those of Choisi are pretty go with the flow. They often travel across Atharia. In general, they do not really care to be against any kingdom, instead they try to support all of them. This makes them pretty neutral people. Though they have settled land who lives in their lands tends to change quite often due to the nomadic ways. It is not often that Choisi Kingdom will start a conflict. This does not mean that they are weak people, they just don't like to be forced into something that is not fun for them.

How Ruler is Determined: Choisi doesn't really care if the heir is male or female nor whether they are the oldest or not. They determine which child of the ruler will be the heir by their devotion to the kingdom and by how much initiative they take.

Story: Choisi was established by Missiah after she broke off from her siblings and she headed towards the waters. Missiah and her people travelled along the coasts and eventually onto islands before settling on a large one, which would become their capital city: Oceanview. Missiah, and by extension her people, thought it would be interesting to live on an island. Eventually, though, Missiah and her people began to wander again. Each place they decided to settle was never stayed at for long. Though, they did establish that it was their lands. In general, Choisi Kingdom's citizens travelled along bodies of water. So, many of their settlements were connected to water in some form. During the settlement phase of the kingdoms, Choisi Kingdom rarely found conflict with the others, generally just changing their path when one of the other Kingdoms decided that an area was their land. It really did not bother Missiah or her people to not get exact lands. This, though, resulted into the Kingdom of Choisi having less land that is more spread out. It served their nomadic nature well, though.

Holdings: The lands of Choisi Kingdom and their rulers can be found here: Choisi Holdings