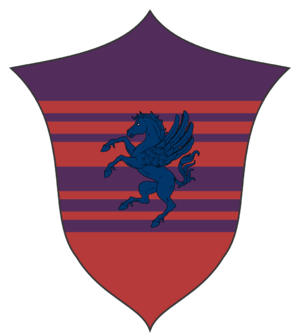 Coat of Arms: A dark blue Pegasus with its wings spread as it rears up.

Story: Cliffshield is one of the VERY few houses ruled by a male. Cliffshields have had a rough go of it, as many of their family members have passed on due to illnesses, accidents, and other such things. Many believe the Chiffshields are cursed and have done something to displease the Gods. Cliffshields do not talk about their history to the pubic very often, if at all. Viscount Romulus is the first male leader of the Cliffshield Viscounty. Most people assume they were made a Viscounty out of pity over earning it.

Family Hook: Cliffshields don't often name their children until they are, at least, 5 years old. This is due tot he fact many of the Cliffshields feel like it would hurt even more should they lose their child in those first 5 years after naming them. They also, often, send the child off with a nanny and don't see them until they are 5 for the same reason. It is likely they are worried they are cursed, as the rumors say, and it could affect the littlest of the family if they are named.