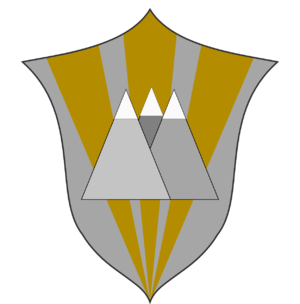 Kingdom Coat of Arms: A trio of mountain peaks.

Kingdom Motto: When you hit a dead end, try starting over. 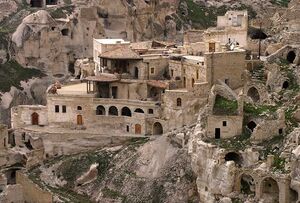 Land, Climate, and Building: Divinus has a climate that is cooler and muggier. The weather often changes very quickly, with little to no warning. the people of Divinus have also built into the mountain as well as along the base. The houses are usually built from wood and stone as well as materials found when digging out inside the mountains, such as minerals, gemstones, metals, and anything else one would typically find in a mountain. They have farm lands, mainly at the base, as the higher up the mountains they go the rockier it gets. (OOC: Example image of what buildings are like is included. They literally build right into the mountains as well as on.)

About the people (Stereotypical): The people of Divinus Kingdom are determined people and they will stereotypically start something over from scratch if it is not working out right for them. They will do what they can to achieve their goals. They believe that starting over can help to achieve something greater.

How Ruler is Determined: Divinus' heir is generally female, as Divinus is more of a matriarchal rule. Though, it is not necessarily the oldest. It is determined by which daughter is most suited to be the next ruler. It is rare but on occasion a male heir is selected.

Holdings: the lands held by Divinus and their rulers can be found here: Divinus Holdings