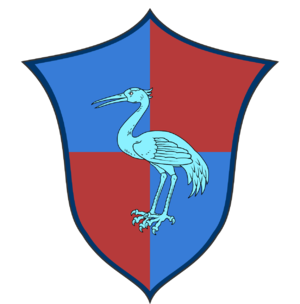 Coat of Arms: A large cyan heron perched at the center.

Motto: If you fight the ever changing tide it will only hold you back, go with it instead.

Story: Hightide is considered the first March to be created for the Choisi Kingdom. They earned their place, outside the usual having past life memories, due to the ability they have to know when the most profit can be gained for them and their kingdom. They are not skilled fighters, usually, but they are powerful when it comes to gaining profit. Taylor has yet to declare who his heir is, which is not commonly done.

Family Hook: Hightides are skilled with gaining a profit one way or another. When someone becomes an adult they are given an amount of money and sent to a gambling house to try and, ay least, triple the money they were given. No Hightide is exempt from this 'right of passage'. Those that fail are teased a little but over all, it really isn't THAT big of a deal if they fail.