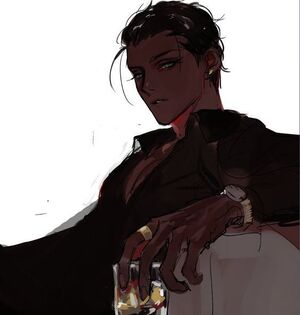 God Form: Larthin is a tall, dark, and handsome man. Over the top so in his God form. He has black hair and dark skin with silver eyes. Her perpetually has an arrogant, confident look to him, which is hard not to find appealing. Her is well toned, without looking muscly. There is no doubting his godly beauty. Larthin typically wears some sort of outfit that is black and gold with jewelry that matches it well.

Mortal Form: Larthin usually takes on the appearance of someone or something important to the person that interests him. However, he does have a mortal form that he uses when he is 'being himself'. He typically looks as what one would call the stereotypical 'tall dark and handsome'.

Personality: Larthin is a petty and easy to anger God. He never hesitates to show his displeasure, is a very public and visual way, if not bordering on cruel. As petty and angry as he might be, he does reward loyalty and is kind to those he cares about. He has a grudge against mortals for what he perceives as hurting his children and forgetting about him. Larthin takes an interest in a great deal of things and usually has to make people or things /his/ if they strike his fancy. As long as you're on is good side, Larthin is really a very decent person.

Worship Expectations: Larthin expects prayers every day, same with offerings. He is a demanding God. Sacrifices are usually viewed with great pleasure by this petty God. He expects any display of worship to be done in quite the production.

Clergy Expectations: The clergy is expected to hold elaborate ceremonies, events, and prayers for him. They are expected to wear black and gold robes at all times when in his temple.

OOC: Players are welcome to submit ceremony suggestions. We expect the name of the ceremony and details about it. Similar to how the already established ceremonies are done.