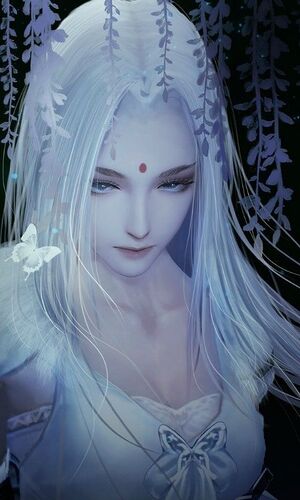 God Form: Snow white, long, straight hair compliments milky white skin and sky blue eyes. Those are words that describe the Second God. She has soft features that constantly have a subtle hint of sadness to them yet a regal appeal. Save for a red dot between her eyes her skin is untouched makeup or blemishes. She is a small, slender woman who is beautifully curved. She has the unmatched beauty one expects from a God. She wears an off white leather corset over an off the shoulder white silken gown. Little platinum butterfly studs compliment the gown, as does a platinum necklace necklace with a butterfly pendant. A delicate platinum chain is around each wrist and has a slender chain that hooks to a ring around her middle finger on each hand. A similar design is around her ankles and hooks to her middle toes.

Mortal Form: When Mataya takes a mortal form it is very similar to her God form but with slightly darker tones. Her clothing is also quite similar. She doesn't often take a mortal form, as she typically deals with mortals in a more indirect way.

Personality: Mataya is a God who wears her heart on her sleeve. When something upsets her it is easy to tell. She doesn't get super involved in the ways of mortals, preferring to watch and admire how they grow and change from a distance. When Mataya speaks it is rarely more than a single word. She does not generally defy the other Gods, content to go with the decisions they make unless it is something she really doesn't agree with aand can't resign herself to accept it.

Worship Expectations: Mataya has only the expectation that those who worship her give kindness to others. If she feels ill intentions are in the worship and prayers given to her, Mataya is unlikely to respond. Her followers are typically expected to wear something that has red on it. A few of her follow the path of their God and speak very little.

Clergy Expectations: She demands little from her clergy as well. Prayers and events held by the clergy are often based on kindness and emotions. The clergy typically wear red robes. It is not uncommon for the clergy of Mataya to say few words, as their God does not speak much.

OOC: Players are welcome to submit ceremony suggestions. We expect the name of the ceremony and details about it. Similar to how the already established ceremonies are done.