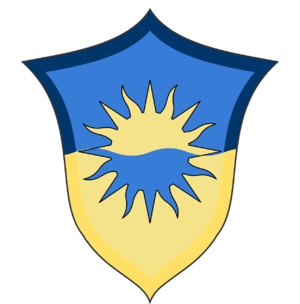 Coat of Arms: A sun that has its top half sandy yellow and the bottom half light blue.

Motto: The light can always be found if you look for it.

Story: Seashores were named a Viscounty not long after Moonbrooke was made a County. Seashores, though they have a short history, were named a county due to their skill in finding rare things among the lands and waters. They have found many valuable items for the nobility and commoners alike of Choisi Kingdom. They sometimes are able to turn a profit on their finds. Viscount Judas is the first Viscount of the family. Jocelyne, a sibling of Jordan, was married into the Santua Kingdom into the Barony of Prideleaf as the Baroness.

Family Hook: Everyone knows that if something needs finding in or on the waters the Seashores are the ones to go too. To prove their salt as 'seekers' they ask another person to throw something important to them anywhere in the waters at any point and let a Seashore know. This challenge is rarely failed by a Seashore. If they fail to find the item another family member will go find it and the one who failed has to give the person they failed some sort of compensation. With a Seashore, failure always comes at a cost.