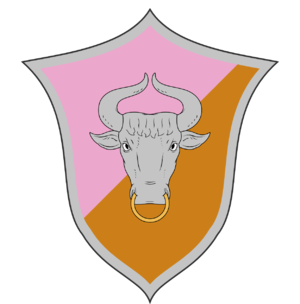 Coat of Arms: A silvery bull head with a golden ring through its nose.

Motto: Why fear the unknown when you can explore it and turn it to being known?

Story: The Sunflowers are people who like to conduct experiments on anything they can get their hands on. It is not uncommon to see them attempting to cross breed an animal or plant. It is not uncommon to see odd or crazy structures on their lands because they are 'testing something out. In general, though, these experiments are done with good intentions being the end results. However, animals seem to be their favored test submits and it can fall into dangerous territories when they do that something could go wrong or they can evoke the wrath of the Gods. Countess Pritha and Count Eamon, Pritha's husband, met their demise when one of those experiments went wrong. Their child, Lady Dema was to young upon their demise so Regent Countess Drusila stepped up to lead the family until Dema turned old enough to inherit the title.

Family Hook: Sunflowers are experimenters and when they end up in a place that is not typical to their lands or lands they know they will find something (animals, plants, seeds, etc) that they can take back home and attempt to grow more of so that they can see what kind of things will result from them. They don't necessarily steal them item but if they view it as something very worth using they likely will attempt too. The majority of time the unique item they find they ask if it can be taken and be brought home.