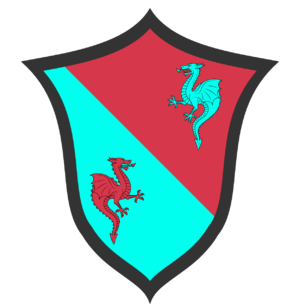 Coat of Arms: A red dragon diagonal from a cyan dragon facing each other.

Motto: Everything can grant knowledge, if you know what to look for.

Story: The Windsong March are typically scholarly people who enjoy exploration. The Windsong March was named a March due to the knowledge that the had gathered on the lands that are controlled by the Santua Kingdom. They have put a great deal of effort into learning about the known details of the Gods, the Curse, and the various animals and creatures of Atharia.

Family Hook: The Windsongs have an extensive library with books on all sort of subjects. They, perhaps, have the largest of libraries in all the kingdoms and the Seat of Gods. They have obtained such a large library by either writing a book or finding one they don't already have. They are meticulous about keeping records of what books they have so none of the books in the family library, not counting personal ones, have a duplicated, outside newer editions and revised copies. The majority of books they have the Windsongs are, somewhat, willing to make copies of on request.