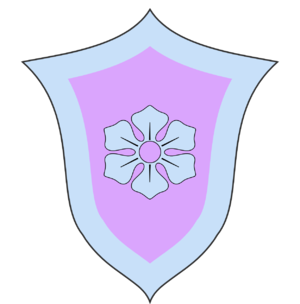 Coat of Arms: A single light blue flower placed at a central location.

Motto: Know your enemy so that you can use their strengths against them.

Story: The Verral family are ruthless when it comes to 'social combat'. Their skill is brilliant and they have, on a number of occasions, saved the bacon of more than one of the Divinus family members and the people of the Divinus Kingdom in general. The most notable social gathers are organized or hosted by the Verral family. They have been a Baronet for a short time. Baronetess Carmela was elevated after a recent Festival of Feasts.

Family Hook: The Verrals are skilled socialites, as expected of a Baronet, and throw the best parties. Which means the adapted a milder version of the 'Debuts' of Courtesans. When a Verral becomes an adult they are expected to hold a grand affair for themselves that draws attention, as a party hosted by a Verral should. There is no real consequence to having a 'flop' for a party but there is going to be a lot of teasing from their fellow Verrals. A Verral having a failure party is always fun to endlessly tease about.

OOC NOTE: Verral history will be updated if need be, should stop being Baronet. The reason Carmela is no longer Baronet will be listed.