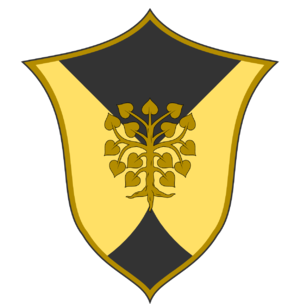 Kingdom Coat of Arms: A leafy oak tree at a central point against a black and gold background.

Kingdom Motto: It is only a sin if you think it is the wrong action to take to save what needs saving. 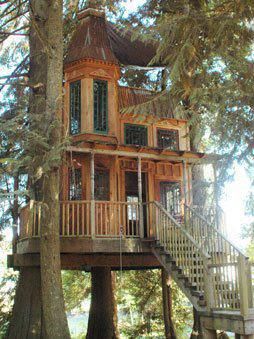 Land, Climate, and Building: Santua Kingdom splits between being on the hotter side and nice and cool, depending on the type of forest the people are in. The land is heavily dense with forests, plant, life and greenery. The farmlands they have are vey small and limited, though, more varied. They are more likely to create orchards over anything else. Their homes are typically built up in trees, though, they can be partially on the ground and are connected by suspension bridges. (OOC: Example image included)

About the people (Stereotypical): The people can be quite the dark type of people. They will do /anything/ they can to achieve their goals. What's a little sacrifice now and again? Nothing is to much if it means getting what they want. They work as hard as they play. They aren't necessarily cruel people they just don't think 'good' methods are the only way to achieve something.

How Ruler is Determined: Typically the heir of Santua Kingdom is patriarchal, though, females have been known to be chosen. While most of the time the noble houses follow the same method it is no bother if a female leads a family. Age is not a factor in who the heir is as long as the son has proven to be worthy of the title. It can be any one of the male children to take over.

Story: As Kalem travelled towards the forests, leaving his siblings behind, he was followed by people who felt his belief that darker deeds needed to be done to cure them of the Curse was correct. Through the forests the people of Santua travelled until the reached the deepest part of the forest, with the tallest of trees. For a while they lived in what could be called tents at the base of the trees but eventually made other plans. They decided in the trees was where they would start to build their homes, high in them, and connected by bridges. This would eventually become the capital of Santua: Greenleaf City. As with each kingdom, Santua Kingdom eventually spread out to grow bigger.

Holdings: The lands held by Santua and their rulers can be found here: Santua Holdings